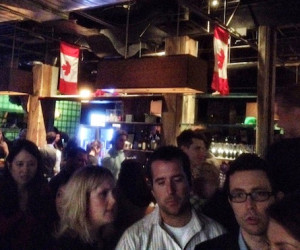 Cobra Club attendees wait in line for their next food sampling experience. Photo by Jason Yung.

It was touted as the most exclusive dining experience in Ottawa — the famous Cobra Club, where the city’s best chefs would get together to cook what they liked.

Only the few, the exclusive, the invited, were allowed to taste. It was all so promising, so alluring. From the very beginning, I was captivated by the mystery. But like a tale involving an exotic charmer, reality differed from expectation. I was left with the culinary equivalent of waking up in a motel bathtub full of ice, missing a kidney – or more specifically in my case, $200.

This is how it went down. Sometime in 2013, I entered my name in the online lottery at eatcobra.ca. The site is nothing more than a simple text box on a nondescript black background. A year later, I was notified by email that I was picked!

The tone of the email was severe: You must reply yes or no in 24 hours, and if you have the nerve to no-show you will be blacklisted.

My immediate reaction was Sir yes sir, I would like to be included in your exclusive event sir! What followed was anticipation and excitement for two weeks. T-minus 48 hours from the event, mysterious instructions appear in my Gmail:

Between 7:00pm and 7:15pm, go to 180 Rideau Street.
Approach the Lady in Red beside the bar, and ask for a glass of Cobra juice.
One glass will be enough for you and your guest.
She will collect your admission ($100 cash per person).

How exciting! I had the same feeling as when they were about to open the hatch for the first time in LOST.

On the day of the event, my guest and I headed to said location. We asked for Cobra juice, paid our fee, and were given a blank white card with a Cobra picture on one side and an address on the other. From there it was a five minute journey that was one third easter egg hunt, one third following the White Rabbit in The Matrix, and one third like the famous steadicam shot in Goodfellas. It was awesome. And then… we ended up at Johnny McBeauty’s.

It was packed when we arrived, packed like a $10 nightclub on Friday. But it was Monday, and I had paid $100 per head. My heart sank as I realized that Cobra Club was subjected to familiar ills that plague many Ottawa events: excessive lines, lack of tables, inconvenient choke-points, overwhelmed staff.

My guest ordered a dirty martini but was told that only wine and bottled beer were available for purchase.

That’s fine, I said. We’ll just eat our way out of this situation.

And the food was not bad. There was a sea cucumber pâté dish that was amazing and a Tuna Takaki kimchi-like dish that was equally good. The others were good, but did not taste as experimental as I was led to believe. We had tried four out of seven food stalls when suddenly, 40 min-utes after arriving (half of it spent waiting in lines) they ran out of food and all the chefs started packing up. In disbe-lief, I asked a chef if someone was going to replace him.

Hangry, we stormed out of Johnny McBeauty’s and I gorged on a $6 burrito to feel better. Clearly, this had been a night of mismanaged expectations.

For the remainder of the week, I cursed the name Cobra like my childhood heroes, the GI Joes. I relayed this story to another friend, who told me of a very different Cobra Club he experienced years ago. He says there was an all-you-can-drink scotch bar and only about 100 patrons milling about.

My guest wrote Cobra Club to complain about the experience and they wrote back immediately to apologize, promising a refund.

Perhaps this night was not representative of all Cobra Clubs iterations. If the all-you-can-drink scotch night was the Rocky of Cobra Clubs, my experience was more like Rocky V. And from their email response, it seems like they understand this too.

However, if they are to continue being the premier under-ground dining event in this city, there is work to be done and loyalty to be won back.