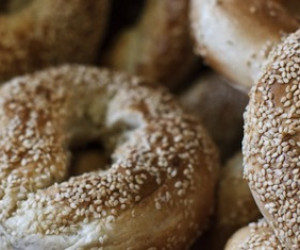 I love bagels. Not the six serving behemoth donuts with holes found in New York and Toronto; the smaller kind made with water. The Mordechai Richler of bagels attributed in the both aptly regal Montreal Mile-End borough bagel holes St. Viateur and Fairmount. But as the son of a “Montreal Anglophone refugee” who fled to Ottawa in the ‘80’s, I grew up on the incredibly comparable, if not, dare I say it, on par 24/hour bagel shop Kettleman’s Bagels. So when the creators of my beloved toasted sesame seed base to schmear and lox started getting some backlash for a post on its Facebook page it hit close to home.

The post in question occurred Wednesday afternoon when Kettleman’s shared this tickld blog post called “Gluten rant from a waitress,” which basically goes on a rant calling out people who make up having a gluten-free allergy for being annoying hipsters.

Harsh and inflammatory, but not entirely off-point. Only 1% of Canadians actually have celiac disease, and only 10% of them, or 33 000, have been diagnosed, according to data from a gluten-free consulting group called Gluten Free Agency as quoted in this National Post story. Yet, nine million people keep gluten free.

I’m sure many people do feel better giving up gluten, heck, I’ve been avoiding bread for the past six months and now I feel like crap every time I have pizza, but it’s about the posers maan!

Maybe Kettleman’s sharing that obnoxious blog post was a bit of bad PR, but if anyone should be able to diss gluten it’s a place that’s livelihood is the ooey-gooey goodness that makes bread chewy.

I have worked in a few gluten-heavy Italian restaurants over the years and I’ve seen customers order the gluten free pizza and a definitely not gluten-free beer on more than one occasion. I don’t need to go out on a limb to say that I’d figure many more servers in “the industry” – especially at Italian restaurants in Ottawa, Toronto and Vancouver – have similar stories.

Talking about gluten is as sensitive as a doughy piece of white bread. Believers follow it like religion enshrined in their gluten-free Bibles – ‘Wheat Belly’ and ‘The Gluten Syndrome’. But, it’s starting to be called out as a petty re-servicing of the Atkins diet. “Once a medical cure, it has become a lifestyle, a puff phrase, an advertising gimmick, a clueless self-deprivation of the perpetually cleansing, epitomized in the nutritional absurdity of the bunless burger,” as aptly put in another Post article.

Kettleman’s responded to their haters before deleting the post with this comment: “Kettleman’s Bagels would dearly love to have a gluten free bagel but can’t because of our contamination. All this article is saying is that people who have celiac or related diseases is horrific but there are a lot of hipsters jumping on the bandwagon or gluten free and making a big deal out of it. If you can drink most vodkas you can eat a bagel!”

Clearly, Kettleman’s making gluten-free bagels makes zero sense when the bagels in the wood oven will inevitably touch all the other gluten around it. Even still, if anyone has more of a vested interest in being anti-gluten free its Kettleman’s. No need for a retraction or apology.