The Blurring Together of Professional Sports and Gaming 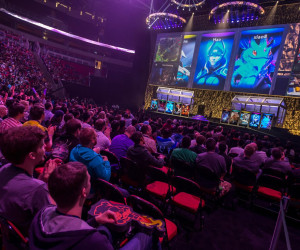 Whether you know it or not, the worlds of professional sports and video gaming are going to start to blur together in the near future. If you’re a gamer yourself, you’ve probably noticed the signs for years, but if you’re a sports fan, you might not have noticed this sea change on the horizon.

On the surface, video games and professional athletics couldn’t seem more different. After all, video games are anything but an active pastime, and professional basketball requires peak fitness. But in other ways, these activities have certain similarities. Just as there are some similarities between betting on regular casino games and sports, there’s a lot of crossover between athletics and video games. They both require talent, experience, and a great deal of hard work to master coordinated movements and strategies.

Beyond their similar demands, video games have been working to be more like sports for decades, primarily in the way they emulate the professional sports experience. Game franchises like Madden and FIFA put out a new AAA title each year, one with better graphics, a more complete manager and player experience, and a greater sense of watching/playing/being within the action.

As more leagues completely license their players, facilities, and trademarks to video games, it was only a matter of time before sporting institutions themselves started to become video game companies, at least in part.

Recently, the Yankees made a big investment in esports, the international competitive video gaming leagues that are starting to become mainstream in some areas. In many ways, sporting institutions find themselves in a mature industry. They’re enormous businesses, but like all big businesses, their days of meteoric growth are largely behind them.

This is not the case with esports. While still not a sure thing, there is so much grassroots interest in competitive gaming that it is only a matter of time before people start watching it just like they do sports. What’s more, esports are slated to be a medal event at the 2022 Olympics. That sounds crazy to some, but it’s true. Are you starting to see a trend here?

Another way that real world athletics and video games are going to become more immeshed with one another is with the advent of affordable, accessible virtual reality. Excellent VR exists right now, but it’s pricey and has yet to have a truly viral hit. It’s only a matter of time before this becomes a big, big thing.

Imagine sports games a la Madden in virtual reality. There are already VR systems that allow for running and other complex movements. What if real athletes started playing in virtual worlds, worlds where it was impossible to get injured in a tackle?