With So Many Mobile Games Available, Are you Playing Yet? 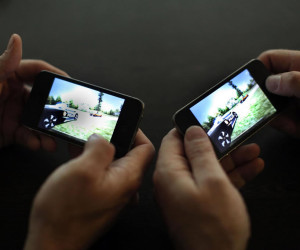 Smartphones have really revolutionised the way in which we connect with the world and the entertainment we use whilst on the move. Our mobiles have enabled us to interact with social media and email, catch up on the latest news headlines, read books, listen to music and play games. No longer do we need so many devices for entertainment, nor are we restricted to where we use them. According to the Vanier Institute of the Family, 60% of Canadian smartphone owners play games on their mobile devices – but which titles are they playing?

The variety of games available for mobile users is vast, ranging from simple puzzle games through to strategic war games. Presented in varying qualities from old-style video formats, like Pac-Man, through to 3D, high-quality graphics and even augmented reality, like Pokémon Go.

Puzzle games can vary from simple games, like Sudoku, through to multiple level strategic puzzle games. There are many great complex puzzle games like Outfolded, which has players endlessly unfolding shapes to reach their goal, or Candy Crush Saga, where players complete levels in the fastest time or the least number of moves. Candy Crush has been one of the most popular mobile games since its release in 2012, with its makers recently adding more levels to help the title surpass 2000 total stages.

If you prefer more strategic games, there are plenty to choose from: whether it is building worlds or fighting in armies with players from around the world. The Battle of Polytopia has players setting up a tribe and expanding their empire through creating militaries, utilizing resources and crushing their opponents. Clash Royale, meanwhile, is based on cards and has short battles more suited for quick play on the go. In this game, the aim is to take over your opponent’s tower through battling their armies.

The mobile game format has also lended itself well to iGaming, allowing gamers to experience casino games on the go. No longer are players restricted to the casinos to get a fix of blackjack, poker or roulette; these are now available at any time on your phone. Casino comparison sites showcase the range of games, sites and bonus offerings available for players. One such operator, Bonus.ca, which opens in new window, also offers playing tips and reviews of popular games. Not only are casinos available for mobile players but slots and bingo are too, with the latter offering live play and chat rooms where neither the atmosphere or thrill of the real-life game are lost.

If these don’t float your boat, there are thousands of other games to choose from. There are racing games like Asphalt 8, where players race through famous cities and perform high speed aerial stunts. There are impressive 3D shooter games like Galaxy On Fire 2 HD, where players fight on missions across the universe. Elsewhere, there are thrilling platform and "endless runner" games like Temple Run 2 that have you running, jumping and sliding through the levels without being caught or falling off the track. Or maybe you'd rather experience zombie killing madness in Dead Trigger, where players take on the role of one of the few survivors in a zombie apolcalypse.

Mobile gaming is starting to operate at a new level, with augmented reality and live play functionality coming to the fore, and as virtual reality develops we are likely to see this change even more. There is already head gear available to enable the wearer to experience virtual reality through their mobile, but we have yet to see the release of a game to make this popular and mainstream. That being said, who would have predicted last year’s Pokémon Go craze, which had players interacting with the real world through augmented reality? With these limitless possibilities, who knows how or what we will be playing on our mobiles in the future.